I was going to review some beautiful Hawaiian God Bud I shared on G+, but on a whim my wife and I decided to drive the 2 hours from Lewis County, WA down to Portland, OR and hang out at the Burnside Bridge.  We wanted to be part the party for legalization in OR.  We also heard about a NORML-organized massive giveaway of free buds and seeds.

Frankly, if there had not been a promise of free marijuana seeds, I would not have driven down.   I'm glad I did.   My wife and I are both not too into crowds and we know literally *no one*.  This is very different for us, and we've been together for a long time.  We were both anxious and out of our elements.

So we quickly made some friends in line, including Savvy (Savi?) and Jean-Luc, and a couple of others who we kind of hung out with (didn't catch names but they were cool).  We bonded over legalization and freedom, and our rights to put whatever we wanted into our bodies to make our minds feel how we want them to. 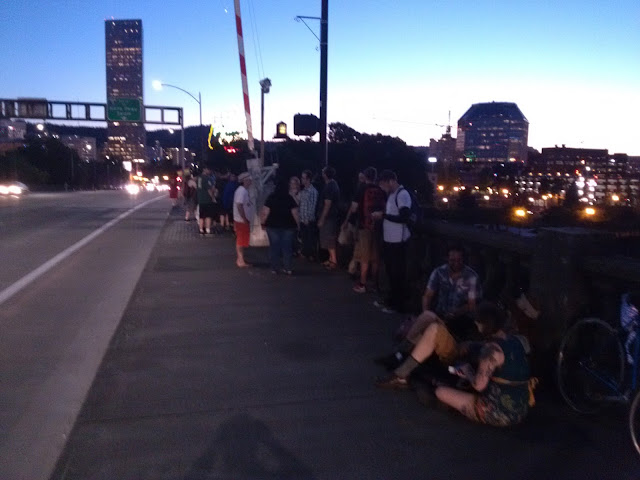 We also bonded over getting just the least bit angry at and talking loud enough for to be heard by those many people who cut in what we thought was a line for some civilized marijuana gifting, as described in the widely read Time.com and the Oregonian articles.  Turns out we all got pissed for nothing (or was it everything?!)

The night didn't go quite as planned, it was still a great time and I'm glad I got to take part in an historic moment in America's and especially Oregon's history.


My wife and I have never been to Portland, but I had Google Maps and we found a place to park nearby and went and wandered over to Burnside Bridge.  There were already 300 or 400 people around and we got into a friendly line.  We made some pals, and the first cutter in line squatted down next to me and started rolling a joint.  I was like "Hi, why are you in this spot?" Jean-Luc, as he introduced himself, (named after Picard) very cooly replied, "You picked a good spot man", and he smoked me down soon after.  From there we also met Savvy, and later a younger guy named Nick (Jean-Luc's friend) smoked me down.  My wife didn't partake as she was driving.

During this, the President of the NORML chapter drove around in a beyond-stereotypical beat up grey van with a loudspeaker.  At one point, he was warned off by the cops because they were driving very slow with his loudspeaker with some talk.  One thing he said was there are 420 lbs of weed being handed out - which would have been cool. 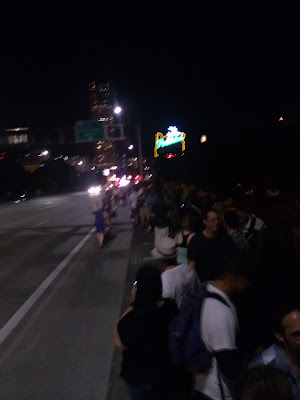 At some point, we realized that the line clearly was overcrowded.  Twice I wanted to grab my wife's arm and take off toward the front, but I'd already gained my friendship with these people around me by grousing about line cutters!  I think the one drunk metal guy would probably have had a few sharp words. 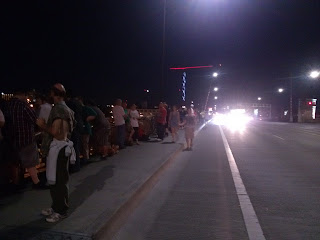 So we hung out and then the lines started moving, but in our position didn't realize that was because the 3,500 people who had gathered all over making the line useless were moving on because the event was over essentially.  It turned out that there was no tent with a well-tended queue of folks getting handed weed and seeds, as was described. 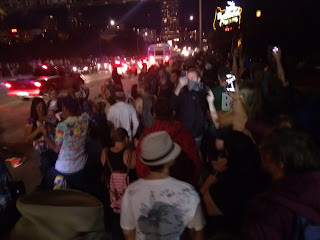 There was not 420 lbs or 200 lbs or probably even 10 lbs of weed being given out.  There were a few young girls with satchels full of joints handing them out for a short while. Most was gifted by people around.

That's alright though.  In the end we joined in with fellow humans and we got to celebrate Oregon making some history, American freedoms are once more expanding, and I got to see a cool new city with the woman I love and adore.  It was awesome.


As soon as the event ended, my wife and I (mostly me) pushed through the crowd - amusingly, many of the people we lined with followed the trail I blazed - and we soon left Portland (without getting much lost!)  We got home around 2 AM - pretty late.

I smoked the half-gram joint when I came home and before posting this.  It was really badly packed, kind of shit weed, definitely tasted harsh, and when it got halfway it got an instantaneous run that split it and spilled the whole joint into the wind.