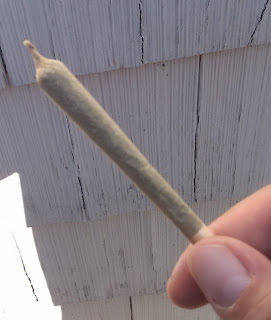 I found out, after spending a goodly sum getting a variety of dank marijuana to taste and enjoy, that it was my next-door neighbor kid's 21st birthday!

What else could I do but turn around, head back out to the marijuana store while my wife took a nap, and grab a joint to smoke with dude?!

So I did - and I got a well known strain that is high potency with huge CBDs and I wanted to help this guy get his night started!  This strain is Indica-dominant, but I've seen it both ways.  Timewreck originally started as a Sativa-dominant strain but over generations (and seed/clone companies), changes happen.

Right as I stopped by the party, the Birthday boy got a good old-fashioned cake in the face!  Shit got a little rowdy, it was crowded, and I figured I'd swing by a bit later to smoke.  The neighbor offered me some arrachera, and I declined only because I had just eaten.

The weed smelled nice and I spent a minute enjoying the smell in and out of the tube.  The scent is really heady, very floral and almost super-sweet.  The aroma is condensed from sitting stewing in this little plastic tube since sometime in early March probably - and it is delicious.

Then I packed it up nice and cleanly with appropriately and patiently applied pressure - pre-rolleds rarely come perfectly smokeable but they can be made pretty great.  I found a gif (hard-g) of how they roll these conical joints efficiently.

So by now, it was quieting down a bit at the party, figured I could go get the B-day boy - No.  The Birthday Man - and Pops to sneak off for a toke.  So I went over and - the B-day boy was gone already!

What was I to do but get down with this bad-ass joint?  Pops declined - he didn't like joints - so I smoked it mostly by myself.  Honestly, these 1 gram net weight motherfuckers kick my ass.  First of all, good luck lighting it with just a Bic and getting a decent burn.  I use a small butane torch to get the first 0.5mm to burn just right then get it steaming with pressure and the old lick-and-stick method if needed.

Choo-choo.  This thing produced a ton of smoke, being 3/4" wide at the tip.  Yes, I switched from Imperial to Metric to Imperial.  The first few hits feel almost wasteful, the thing is so wide.  Once I got a few deep puffs in, smoking this thing alone, I was already getting wasted.  By time I was halfway I had to call it quits and I was coughing so fucking hard near the tail end.

The high is important too - and this was one!  I mean, I smoked about 1/2g of weed by myself and it's huge CBD, heavy, heady shit.  I got stoned and I have no idea what happened to the time.   I highly recommend it.


The folks at Orgrow need to keep on doing what they're doing.  I've reviewed two other Indica-heavy strains by this farm and all 3 so far have been outstanding experiences and a good value - they're priced at 2g for $25 or this joint for only $12.
at 7:20:00 PM