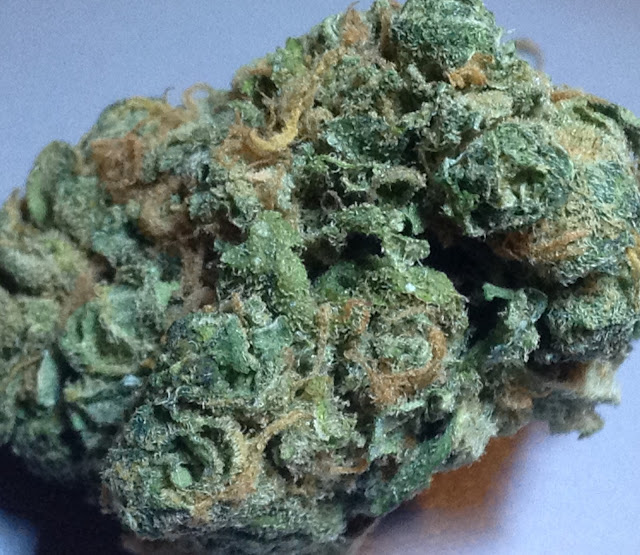 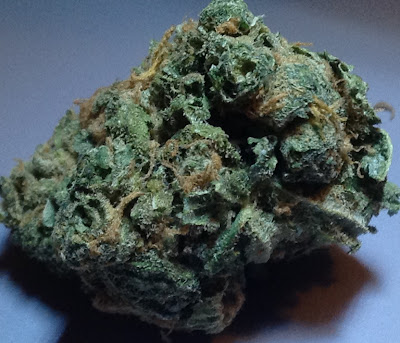 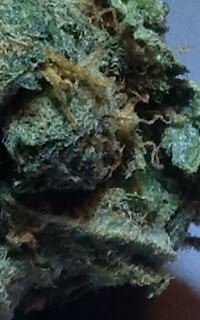 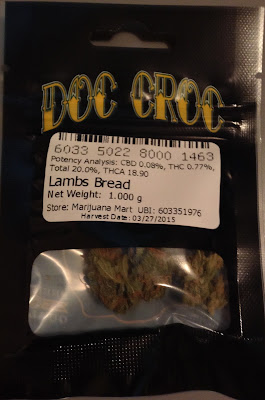 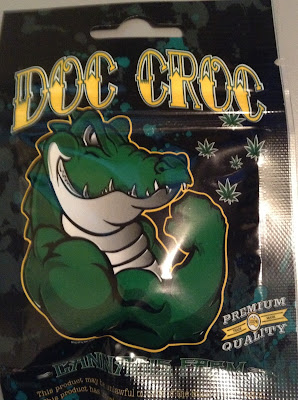 Another seriously beautiful sativa from Doc Croc.  It's densely coated in crystals and the hairs are just as densely present.  The buds are fluffy like a great sativa is expected to be.  They're truly light and not at all springy - they just smoosh..

The smell is flat.  It's slightly dusty and herbal like old, dried, cut grass.  It has no real presence or spread.  The lightness of the buds definitely made me think this would smoke light, so I rolled up a pretty-good-if-I-do-say-so joint.  I did the exact same thing for the other light, airy, Doc Croc Sativa-dominant Hybrid I got from Marijuana Mart, and it did me good.  Overall, it was a tight 0.6g with a tiny little filter.

I tried to get a good pic of it about 25% remaining, but none of the shots I took turned out well.  I was high as shit by that time as I was goin' solo except for one or two hits my wife took early on.

The smoke is just as light and airy as I expected it to be, and much like the smell, there's only a flat grassy sort of dusty flavor.  It's not bad, but it sure isn't the pungent, fragrant, smelly, delicious high-end trees I prefer to smoke.  I can't tell how much of that is from the strain and how much is from the age (4 months) and dryness (considerable) of the pot itself.

The high was nice and relaxed, super chill and mellow.  It was kind, I felt touched in the head for quite a while, just barely aware of the goings-on around me as I kicked it in my backyard and enjoyed the evening sun while watching my daughters and the dog run around.

I got sincerely deep munchies after this. I ate so much dinner - and the chocolate chip cookies my wife made for dessert - that I now, some time later, still feel disgusting.  It was great.

Overall, a good mental, sativa high. While it has some fair body relaxation and restfulness - the head is really where this high is at.  Once more, based on the really soft nature of the smoke, and the lack of complex flavors, the mellow but real high, I have to call this strain Old Lady Weed.  And once more, there's nothing wrong with that.