Because I bought two pre-rolls, and because they seemed to be such disparate sizes, but both claiming to be 1 gram joints, I had to compare this to LA Cheese.

They're so very different in size, but both weighed exactly the same.  I even calibrated my scale because I didn't believe it at first.  Not only that, they're both derived from the LA Confidential strain. 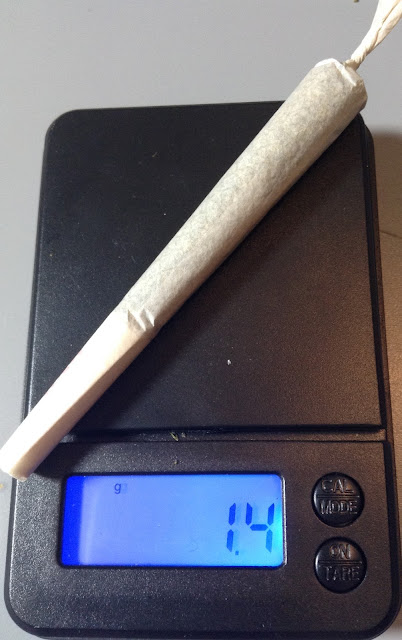 On opening the Sour Con tube, I thought "I'm sour, I was conned" not only with this tiny little joint, but there's nothing sour in any way about the smell.

The smell on this is very earthy.  By which I don't mean a big fragrant garden, and the underside of elephant ears in the morning rain.  I mean some fresh shoveled dirt from an abandoned lot that once had a trash-fire earthy.  It's a fuckin' shame to be describing any legal marijuana like that.

The smoke on this was ragged, and the sourness came through not as the general pungent, wide-mouthed sour I expect, but instead a bitter, tasteless sour note through the flavor of burning vegetable matter.  The exhale had a faintly sweet undertone, but it was a cheap sweetness.

The joint burned pretty roughly, and even though it smoked super-fast (this was some very dry bud), it took lots of tending not to burn.  I gave up and the last 1 inch at the seam was just a big goopy run.

The high on this was way better than the smoke.  It struck me quickly with a decent amount of happy, uplift and grins.  I felt the high quickly, which is expected from older marijuana (harvested just under a year ago).  As marijuana sits around, the THC degrades over time to THCV, which effects you much more quickly.  It also has much lesser potency than does THC, and makes THC less effective. It also is known for causing headaches.

This was not a headache in a joint, but it was a real quick high.  The legs were very short here, and I was left feeling worn out and crabby.  I needed a weed-nap to recovery from this grimy high, but didn't get one and that made things less pleasant still.

Overall, this wasn't a great marijuana experience.  Compared to the deliciousness of the LA Cheese I was comparing this to, it was even less pleasant.
at 4:20:00 AM