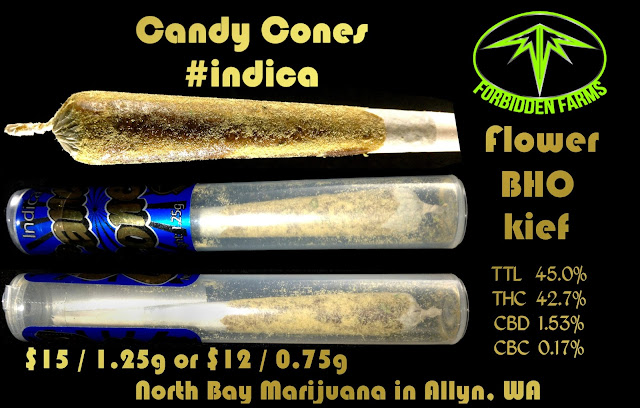 It's summer time and what sweeter way to roll than with a Candy Cone! This is Forbidden Farms' answer to the heat outdoors. This is a super-chill #TwistedTuesday with this monster 1.25 gram joint.

The last time I talked to Taylor, he told me all about these. They start with their remarkable flower, and roll a fat gram cone joint. These are usually like 1.1g at this stage. Next, they take their high-potency BHO, and wrap up a quarter gram of it around the outside of the joint. To finish, a nice roll in a generous amount of freshly harvested kief.

Because they're wrapped in BHO, they're generally going to be susceptible to extremes of heat, so you can't leave this in the car and expect it to be perfect. On the way back from picking up a grip of these, DabTechDanny and I pulled out an a/c vent in his truck and shoved them deep in there so they'd stay cold. We casually interact with massive amounts of cannabis and drive around with the legal maximum per individual sometimes, so this felt anachronistic - out of place for the situation.

The joint itself is well coated with kief and BHO. In fact, it looks like way more than a quarter-gram. It's deep, and smells incredibly dank. It's got a skunky, earthy aroma that pervades.

Lots of 'twax' joints will run, roll, spill, and fall over. Not a Candy Cone (we've been through quite a few!). This joint holds up, there's a bit of a drip from the extract, but that's expected. The burn was perfect - straight down to the end of the filter without any real manicuring.

The wax outside is great. At one point in the burn, a fat blob came slowly rolling to ward the filter-cone. I scooped it off with my dabtool and put it to a hot quartz nail. Smooth and super purple tasting!

Smoking this, early the purple of the indica shines through everything. That deep BHO waxiness spread but stopped at the back of my lips. I didn't get all throated up like I usually do with a twax joint. Flavors early on were of passionfruit that Danny called out, way under the purple, sweet and I noticed strong stonefruit hints.

Midway through, the joint took on a real soil flavor, rich and clean. It tastes living. and pure. There's a traditional "herb" component. Nearing the end, there was a burnt lemonpeel quality that came through. The terpenes were so rich it was insane. The resins in that BHO were soaked into the deeply resinated joint end, and it fairly bubbled like tar as we pulled gently at the smoldering last third. This is for real.  Whatever terpene component it was near the end, through all the deep, rich flavors, it had a flower petal sort of quality to it. Really faint, and soft like jasmine blossom water.

This joint burned perfectly. Absolutely perfectly. There was not even a bit of canoeing down this thing. It's pretty surprising honestly. A top class burn.

The high on this was intense. It came on quickly with a chill effect - very relaxing to the body and soul.  We got some giggles and the session turned very smiley. Permagrin was upon us! We felt this heavily in the eyes. It was like all the higher functions in my brain were set to "Brrrrppptt!!" Legs on the joint were heavy duty, lasting for a long time.

Overall, hands down the best BHO-twaxed joint on the market that I've tried. I've smoked several of these and I can't wait to share more about how awesome the other experiences were. Go find them all over and ask for them by name!
at 4:20:00 AM