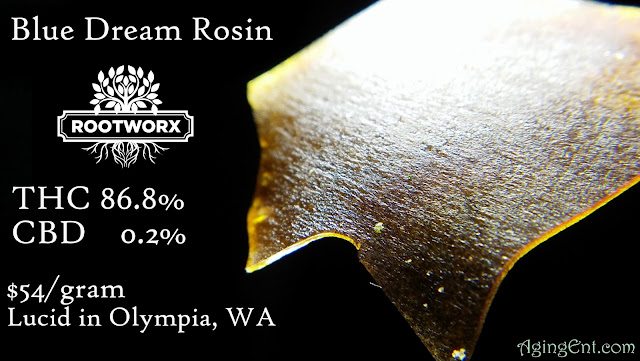 I was privileged to get a special jar of Blue Dream flower by Rootworx. They're a sponsor (go read the About Me!) but from the first moment I spoke to COO Ryan about appearing on the Marijuana Encyclopedia, I felt I had new besties.  I even got the chance to tour the Rootworx facility which was just remarkable.

They're committed to quality, and it shines through in the product. Believe it or not, this is actually the first Rosin by Rootworx that I've had. I sure have smoked lots of flower and BHO.

Opening this up, first of all the texture. This is like a thin smear spread across the parchment. It's so pale and translucent - the parchment texture was clearly visible through the thinnest parts. Dark amber starts in the center. This looks amazing.

I was surprised that what scent there was was so tight. This flower was pungent and dank. I understand there are big changes in this process, but this aspect alone makes it clear: rosin isn't just some smooshed flower.  This is an extraction without any solvents involved. Just heat and pressure. That aroma, by the way, is of lemongrass and clean laundry.

The texture of this is magnificent! It's like the most crisp, tight shatter ever if you try to stab and pull it. It goes kSH! like broken glass. You can see the shards I broke off in the picture with the parchment right at center of the fold.

A slow twist results in a bend effect that results in the rosin going limp and slightly tacky. You can see both these textures of it clearly - one pic on the silpad is super gooey, the last one shows that crisp edge.

On the inhale this is soft, and smooth. Sweetness dominates the entire mouth. A short clean flavor comes through sometimes in the hold or exhale. Berry components are definitely present throughout this smoke, like tendrils of syrupy richness. That smooth feel holds out, leaving a texture of velvet for a moment or two after the dab. The flavor at the end was soft berry and finally some citrusy notes came through.

I smoked a gram and a half of this over the course of a day because I really wanted to explore it. I don't often consume quite like that, but I was celebrating, frankly. AgingEnt.com is growing, I'm having a great time and we have so much exciting content coming for you. It's all over just amazing. Plus 4/20 is coming, and we're planning quite a few ways to celebrate that too!

The high on this was incredible. I had a smooth uplift, which was pretty fast. Like before I finished inhaling. Before all the smoke was out of me, I was smiling from ear to ear. A spiraling euphoria is present on this, the old rocket-head effect, and when it pops ADD takes over for a while. I was bouncing from task to task, and productive.

Throughout it all, however, was a foggy fuzzy eye feel. My sinuses were stoned as fuck. My wife told me my eyes had never been that red. Granted, I'd never dabbed that much concentrate in that period of time. Great times! I mean it, because a happy feeling kept with me on this whole experience. I like emotionally balancing strains and preparations. Legs were great, the end was clean.