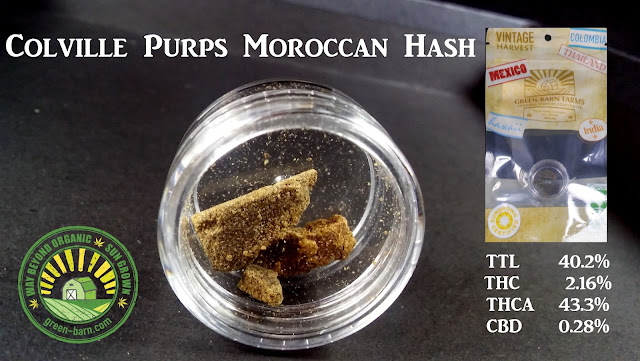 
This incredible traditional Moroccan hashish lifted my night. I had this amazing flower in it's own review recently but we also had it on our first Marijuana Encyclopedia Video Episode!

Visually, it's definitely a pressed kief product. You can see the fluctuations in density and color throughout. It's also really thin. The product was obviously well pressed and the break is unclean, leaving a jagged lumpy edge. It does not crumble at all but holds itself together well.

The color seems dark umber but when you get close you can see it carries the same dark purple of the magnificent flower, and with a greenish tint. The edges almost glow with a faint yellow.

On the inhale, there's a soft sparkling element to the delicious berry-backed lemonade flavor. Yes - sparkling blueberry lemonade is how I described the flavor on this hashish.

It's incredible. I smoked almost an entire half gram of this in my bong. From start to finish the sparkling lemony element was there. It was like a faded Country Time lemonade mix on my lips on some hits, it was so potent. Near the end, it was hiding under the mucky, roasted-hash profile, but still extant.

Rich blueberry rides throughout the exhale, which has a much more traditionally hashy, cooked-kief flavor profile on the end. The ash on the burn was perfectly smooth.

The effect on this was immediate. I had an instant hush. I slowed way down, and my head became logy right after my first two bong-rips. Damn this was fast hash!

While I was enjoying the clean lemon aftertaste, I noticed a positive headchange. I felt strong mentally uplifted, a happiness from deep inside. I was very sedated, but joyful. Everything was funny, I had lots of laughs. Giggles ran wild.

Legs were decent on this awesome hash. Overall, I've never had such a happy, giggling effect from hashish. The quality of the press and consistency of the hash was pretty incredible too. I'm glad I got this in my pipe - it was awesome. Green Barn Farms has got this Moroccan game down.
at 4:20:00 AM