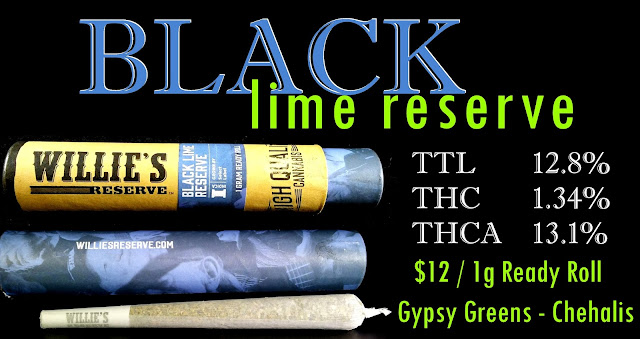 Celebrity weed is a thing for real. I've reviewed Tommy Chong cannabis and we just smoked some Dog Pound Gangsta - Daz Dillinger DGPBudz #Meteorites with the guys from Seattle's Private Reserve. I'm something of a fan.

Packaging on this is definitely quality. The recycled cardboard tube allows for plenty of brand recognition, even if the product is ultimately in the same plastic doobtube everyone else's pre-rolls are sold in. It just offers so much more recognition.

The joint itself is definitely a poured cone. It looks mass produced, and a bit sloppy. There's a big gap between the crutch and the flower in the joint, we had to tap it and twist it and work it for quite a while before it seemed to be solidly formed. It did have a pretty considerable extra paper at the tip, we cut it off to help ensure a good burn, as well.

Sparking up, right away there was a run, even after the hard work we put in.  We were able to tame it pretty quickly, with the old lick-n-stick method. That run came back over and over through the gaYou can see from the fill pics, and the way it burns, that this flower has been through a food processor or blender. It's chopped into ultra-fine powder.

On the first inhale it's really sweet, with deep earthy terps, and then the intense lime-ish flavor kicks in. This lime aspect is present, and seems somewhat artificial. It's reminiscent of 'twist of lime' tortilla chips or cheap margarita mix. Exhaling, it has a tart limey mouthfeel as well.

Once this joint went around the table a few times, there developed a berry tone throughout the rest of the joint. That almost sappy-sweetness became a more lush expression of those terpenes. Exhaling left massive waxy feel all over the mouth and lips.

The analytics we see in legal cannabis are basically meaningless due to corruption and lack of oversight. Not only that, the aspects that are measured, while important, are not as important in determining effect as terpene profile, or a more robust cannabinoid profile. Or better, allowing budtenders who describe effects more directly.  In any case, this cannabis has very low cannabinoid content.

The high came on smooth, with a nice mellow chillax atmosphere. There was some smiling and happiness overall. We hung out and had real camaraderie. This is definitely happy, social weed.

Overall, this was truly anticlimactic. While I can almost imagine the very aged Willie Nelson smoking chill, mellow cannabis, this is really bottom shelf. For a pre-roll that costs 20% more than a damn fine joint would cost, the flower was treated the same way bottom shelf trim joints are treated, the cannabinoid profile the label has is some of the lowest I've seen in recreational cannabis. I'm not impressed at all, and I didn't feel like I was smoking celebrity weed.